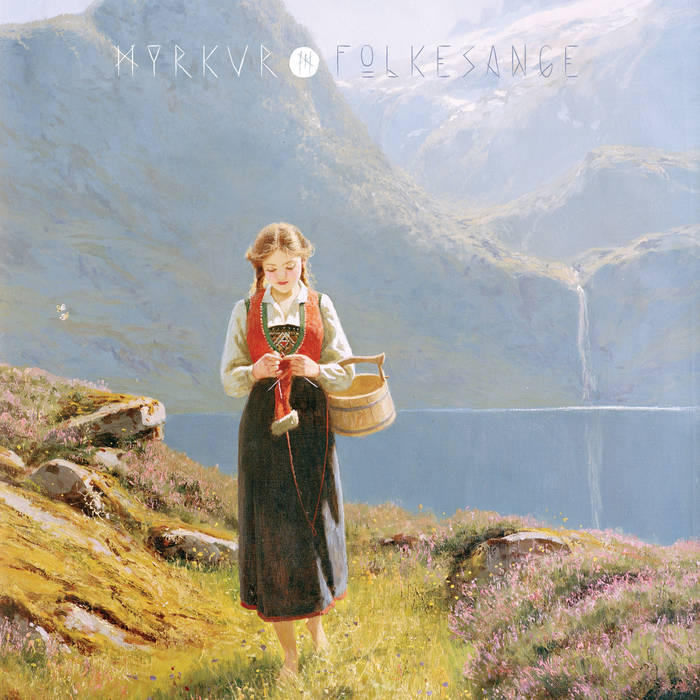 Master of Alchemy With Folkesange, Amalie Bruun has committed a full LP to her folk culture and heritage. A little over produced, but still I am won over by Bruun's exceptional talent, proving herself to be a master of composition, arrangement, multiple instrumentation, as well as multilingual & deftly switching genre styles. Bruun's singing voice, and the production treatment of it here, is beautiful to behold, enchanting. This captivating LP will be enjoyed many many times during the remaining years of my life. Favorite track: Fager som en Ros.

Tom's Reviews I'm not even sure what to say about this album, it's just so good. The beauty of the vocals, the neo-folk direction, and the songwriting are all amazing. I recommend a dimly lit room, and solitude in order to fully appreciate this very fine album. Favorite track: Svea.

Lethologica82 Close your eyes, listen to the gentle breeze rustling the tips of the trees, and picture the Northern Lights emblazoned across the starry night sky.

Now you know what this album sounds like. Favorite track: Tor i Helheim.
more...

Amalie Bruun has always paved her own path, challenging underground preconceptions of heavy metal ever since the release of her debut Myrkur EP in 2014. Her first two full-length studio albums, 2015’s M and 2017’s Mareridt, recast black metal in the most personal yet expansive of terms, their blending of Amalie’s Danish folk roots with tempestuous internal struggles breathing new life into a subgenre whose followers can be rigidly possessive.

With the release of her new album, Folkesange, Amalie Bruun has set out to journey into the very heart of the Scandinavian culture that marked her childhood. Folkesange relinquishes black metal for a refined yet far-reaching evocation of traditional folk, combining songs ancient and new to sublimely resonant effect.

After the nightmare-induced visions that wrought themselves throughout Mareridt, Folkesange offers an emotional sanctuary, a means to reconnect to something permanent and nature-aligned. It’s an awareness that’s become deeply bound to the album’s organic, regenerative spirit, from the opening track Ella’s heartbeat, frame-drum percussion and crystalline vocals that become the grounding for a rapt, richly textured awakening, to the gentle carousel of the closing Vinter, with its nostalgia-steeped connotations of seasonal, snowfall-bewitched awe.

Storytelling, rites of passage, and the invocation of a continuity that passes through time and generation are all part of folk music’s tapestry, and Folkesange taps into all these currents in their most essential form. In part a purist’s approach to the genre, free from over-interpretation and fusion, the use of traditional instruments throughout, such as nyckelharpa, lyre, and mandola offer a deeper, more tactile connection to their source, an unbroken line of communication back to the past.

But the album is no museum piece; it resonates in the here and now, aided by the spacious production of Heilung member and musical collaborator Christopher Juul. Cinematic yet intimate, Folkesange exists in a state of boundless reverie, bourne by string-led drones, cyclical, elegiac rhythms and Amalie’s frictionless voice, all carrier signals for deep-rooted, ancestral memories, and associations felt on an elemental level.

It’s a binding of the otherworldly and the earthy that echoes the the subject matter of many of the tales themselves. Written by Amalie, Leaves Of Yggdrasil’s medieval cadences bind tragic love story and mythology, full of both fairytale wonder and deeply human foible. Tor i Helheim, its dreamily persistent rhythm redolent of both innocence and encroachment, is based on a poem from the Icelandic Eddas, relating a journey into the underworld of Hel where the sparse nature of the accompaniment becomes the medium that carries you along in its thrall.

An immersive experience in its own right, but also belonging to a wider, pagan folk-based renaissance that has attracted a devoted following worldwide, Folkesange answers a need that has become ever more pressing in turbulent times. A zeroing in on a resonance that is both intrinsic and enduring, it’s a rediscovery of personal grounding, and an experience that reaches beyond culture to remind us of a shared, deeply rooted inheritance. A tuning fork that binds the personal and the universal, Folkesange is a reminder that the most transcendent experiences are those closest to home.

Though the word "myrkur" means "darkness" in Icelandic, MYRKUR (aka Amalie Bruun)'s music is far from monochromatic. With its distinct sense of Nordic isolation, MYRKUR's compositions are at once savage and delicate. Choral and folk elements abound, lending the music a mystical, legendary quality and an untouchable equilibrium between dark and light. ... more

Bandcamp Daily  your guide to the world of Bandcamp

Featured sounds from Fly Lo and Ahmed Idris, plus Mother Nature hops on to drop off new project